Pulmonary vein isolation (PVI) is a treatment for atrial fibrillation (afib). The abnormal electrical signals that cause afib often begin in the pulmonary veins. These are the four veins that bring oxygen-rich blood (two from each lung) to your left atrium. The PVI creates scar tissue around the places where the pulmonary veins connect with the heart. This limits or blocks these abnormal signals. This procedure can reduce the frequency and severity of atrial fibrillation (often called the burden of afib).

The first line of treatment for afib is almost always drug-based. Ablations are used if drugs are not effective enough in reducing the burden of afib, or if the patient has serious side effects from the drugs. The reason is that PVI involves some significant risks. Since it is not always successful, those risks may be more important.

Sometimes PVI can eliminate afib, or nearly eliminate it. Unfortunately, HCM patients are often not so lucky. It is fairly common for repeat afib ablations to be needed with HCM patients. Sometimes afib is bothersome even after a number of ablations. The goal of PVI is to reduce the frequency of and severity of afib episodes. It is not generally a cure.

Who should perform your PVI?

Electrophysiologists (EPs) are cardiologists who specialize in heart rhythm problems. Essentially all EPs are trained to perform PVIs. Unfortunately most do not have extensive experience in PVI for HCM patients. HCM patients' hearts are different structurally from those of other patients with afib. As a result, HCM patients are less likely to have a successful PVI. You should talk with your Center of Excellence team about where to have a PVI done. For some ablations - like those for atrial flutter - they may tell you that you can have it done anywhere. Other kinds of ablations - especially for atrial fibrillation - are more complicated in HCM patients. Your doctor may recommend having it done at a Center of Excellence.

The procedure, its risks, and follow-up

PVI can significantly reduce the frequency of episodes of atrial fibrillation, as well as their severity. You may be able to get substantial relief from PVI. However there is no evidence that it reduces the long-term risk of stroke. You should expect that after PVI your doctor will still want you to stay on anticoagulant drugs, even if you are not having noticeable episodes of afib.

Pulmonary vein ablation procedure: Energy is delivered through the tip of the catheter to tissue that is targeted for ablation. The energy is applied in a circle around the connection of the left upper and lower pulmonary veins to the left atrium. Image © Cleveland Clinic Journal of Medicine, 2009. 76(9):545. Used with permission. 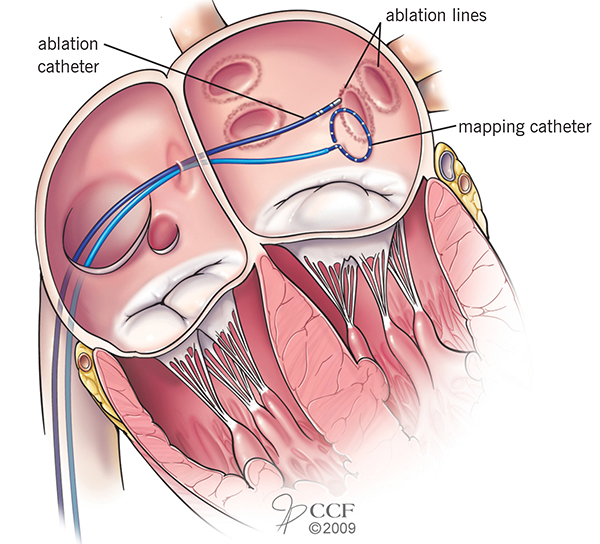 Pulmonary vein ablation procedure: Energy is delivered through the tip of the catheter to tissue that is targeted for ablation. The energy is applied in a circle around the connection of the left upper and lower pulmonary veins to the left atrium. Image © Cleveland Clinic Journal of Medicine, 2009. 76(9):545. Used with permission.