HCM: History and other names

Hypertrophic cardiomyopathy (HCM) has been given 75+ separate names by individual investigators over the last 60 years.

No other disease can make that claim!

The Many Names of a Disease

Other names that may still appear in some medical records:

For a complete list, see "A guide to HCM" which is available with membership.

Why so many names?

The main reason for the large number of names has been the fact that HCM is so variable in the symptoms that patients exhibit when seen by a physician. For many years, few individual investigators saw large numbers of patients with HCM, so many researchers came to regard the disease based on their own limited experience. Many of the names are somewhat misleading since they emphasize obstruction to left ventricular outflow. This is a highly visible feature of HCM, but is probably present in no more than about 25% of all patients.

Today, just about all HCM experts and other cardiovascular specialists now regard Hypertrophic Cardiomyopathy or HCM as the best single name for this broad disease spectrum. This term emphasizes hypertrophy, which is the diagnostic symptom in most patients. The name also emphasizes the fact that this disease is a form of cardiomyopathy, a heart muscle disorder. Hypertrophic Obstructive Cardiomyopathy (HOCM) is used to describe the subset of patients who are obstructed. HOCM and HCM are not separate diseases.

History of HCM as a Recognized Disease

There is some uncertainty as to when HCM was first discovered and diagnosed. In 1868, there were a few reports from France, Germany, and the UK, of a few patients that died suddenly of a disease with similar features to HCM. The first patient to be diagnosed with HCM is thought to have been a 75 year old woman with worsening dyspnea (breathing difficulty). Dr. Henri Louiville revealed that her left ventricle was enlarged, thick, and had concentric hypertrophy. The reports from Brock (1959) and Teare (1960) are generally regarded as the first contemporary descriptions of HCM.

The first patient in the USA diagnosed with HCM was Mr. Claude Brady - a salesman from Virginia. In 1948, when Brady was 11-years-old , the local family doctor, Dr. H.O. Van Tromp, heard a murmur in Brady. This was attributed to a family trait. Brady says he can trace the disease back four generations to his paternal great-grandmother. She and many other family members died at unexpectedly young ages. For years, it was called the "Lemons' Disease". 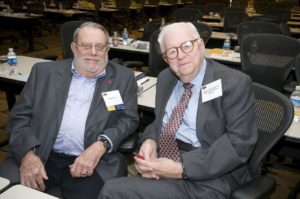 The first U.S. patient diagnosed with HCM and the doctor who diagnosed him reunited at HCMA annual meeting 2009.

Dr. Van Tromp recognized that no other doctor in the world knew what disease Brady had. In 1959 he was finally proven correct by Drs. Eugene Braunwald and Andrew Morrow. Using information from Mr. Brady's siblings, Morrow and Braunwald were able to describe HCM in a modern fashion. A great deal still remains to be learned about HCM, but their work laid the basis for what we know today.

Interestingly, Mr. Brady lived a relatively normal life until 1988, when he underwent a heart transplant. Mr. Brady is still living today, with his transplanted heart. He has founded two organizations: Transplant Recipients International Organization Inc., and Transplant Awareness. He continues to help to further HCM research.

You can see him speaking with Lisa Salberg in this video:  https://www.facebook.com/4HCM.org/videos/a-conversation-with-claude-brady-the-first-patient-ever-diagnosed-with-hcm-in-19/908347812978730/