Overview: Myosin inhibitors are drugs that make the heart beat with less force.

Myosin inhibitors are a new class of medication being developed for people with HCM. This is the first time HCM has had a drug designed for it. The other medicines used for HCM were developed for other heart conditions and do not target the HCM heart specifically; however, they are helpful. This class of drugs is being called “camtens” due to the ending of the names, much like beta-blockers typically end in “LOL” (metoprolol or propranolol).

The heart as a pump

The contractile portion of the heart muscle (what makes the heart relax and contract) is called the sarcomere. The interaction between two parts of the sarcomere, actin and myosin, is responsible for how much the heart contracts. In HCM, the heart squeezes too hard and doesn’t relax enough to fill well.

Medications in the myosin inhibitor category

Mavacamten - submitted to the FDA for new drug approval (NDA).  Scheduled for review in early 2022.

Myosin inhibitors reduce the interaction between actin and myosin so that the heart does not squeeze as hard.

Myosin inhibitors improved symptoms in about 2/3 of the people who have taken them in clinical research studies. These drugs have been tested primarily in patients who have HCM with obstruction. There is interest in future trials in the non-obstructed population.

SIDE EFFECTS OF MYOSIN INHIBITORS

In some research subjects using myosin inhibitors, ejection fraction (EF) was reduced to below 50%. This effect reversed when the subjects stopped taking the medication. In one study, those patients whose EF dropped had the doses adjusted and were able to continue as participants. 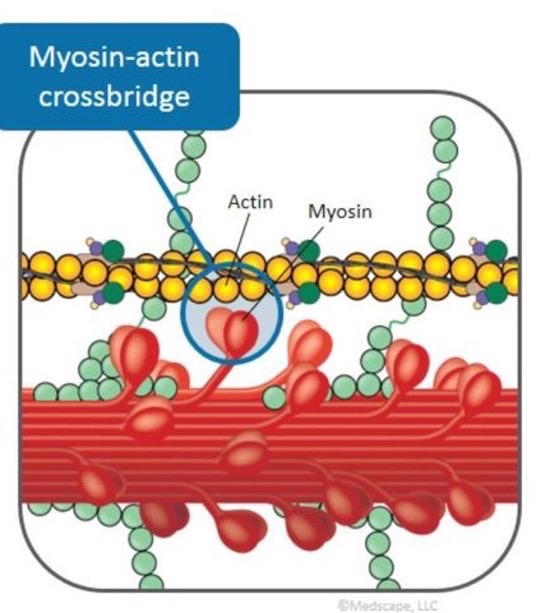