Summary: Blood flow out of the heart to the body can become obstructed (blocked) because of the thickening in the heart wall.

Hypertrophy means that muscle cells become larger, and so the muscle itself increases in size. When you exercise, this happens to your muscles - so it's a desirable result. But hypertrophy in your heart muscle cells, as in HCM, can cause serious problems. "Cardiomyopathy" means a disease of the heart muscle cells.

Muscle thickening in HCM occurs mainly in the wall of the left ventricle, and particularly in the septum that separates the left and right ventricles. This increase in the thickness of the septum can (it doesn't always) cause obstruction of the blood flow out of the ventricle and into the body.

There are two main ways the thickness can cause obstruction. The first way is obvious: since the septum is thickened, the passageway (called the left ventricular outflow tract, LVOT) out of the ventricle becomes more narrow. The easiest way to think about why this causes problems is to think of what happens when you partly close off the end of a garden hose with your thumb or a nozzle. The opening becomes more narrow, so less water can pass through. The pressure inside the hose increases. And as a result, the water that does come through the opening comes through at a greater speed. What happens in your heart is similar: the thickened LVOT means that less blood comes out of the ventricle on each beat. As a result, the blood pressure inside your heart increases and the blood that comes out does so much faster.

The second part of obstruction is caused by the mitral valve opening when it should be closed (systolic anterior motion, SAM). SAM occurs because the blood flow out of the LVOT is no longer smooth and orderly. Some cardiologists describe it as being like an unlatched door banging open and shut in a strong wind. When this happens, one leaflet (flap) of the mitral valve opens directly across the LVOT, just when blood is moving out of it. This makes the obstruction worse. SAM also causes mitral valve regurgitation, where some blood in the ventricle moves in the wrong direction, back through the mitral valve into the left atrium.

Obstruction means that there is a sizable gradient (difference) between the pressure inside your left ventricle and just outside it, in the aorta. If there were no obstruction, the pressures would be about the same, just as in a garden hose without your thumb blocking it. This gradient is measured like any other pressure, in millimeters of mercury (mmHg). Gradients smaller than 30 mmHg are generally not considered to represent obstruction.  Gradients can have two parts: a fixed part and a provocable part that occurs during exercise. Some people have only fixed or only provokable gradients, and others have both. Gradients can be measured with echocardiograms and MRI. This measurement of the gradient is what tells us how severe an obstruction is. The thickness of the septum itself - though that is the number many patients are interested in - does not tell us about obstruction.

Obstruction can cause many symptoms, including fatigue, heart murmur, light-headedness and fainting. More than 70% of HCM patients have some obstruction. Most can be treated successfully with medications alone; a minority need to have their septum reduced, by myectomy or alcohol septal ablation. 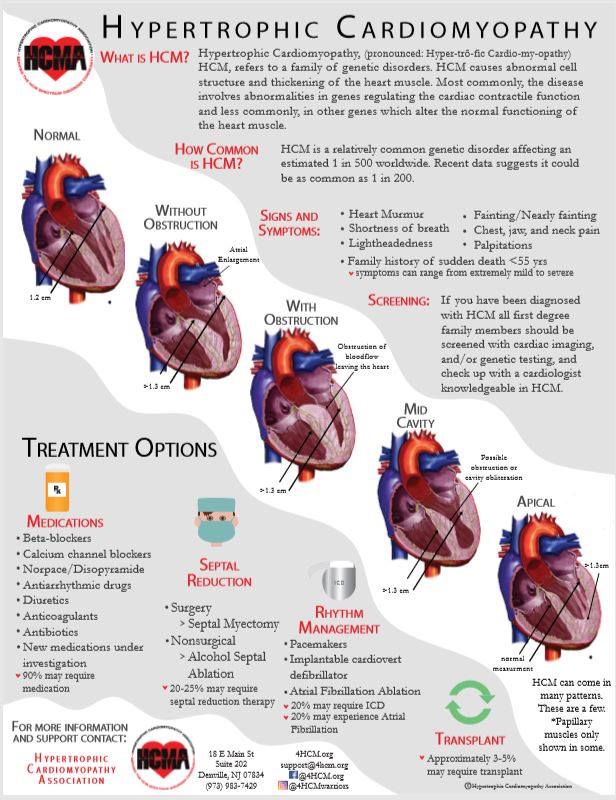