An electrocardiogram, or ECG/EKG, measures the heart's electrical activity. Each heartbeat is caused by an electrical impulse. This pumps blood to the body. After the impulse, the heart refills with blood. EKGs are a common, noninvasive, and painless test. They can detect many heart problems.

From the EKG, a doctor can tell whether heartbeats are regular or irregular, too slow or too fast. They can also tell whether the electric impulses are blocked somewhere in the heart. With the help of an EKG, a doctor can often see if certain parts of the heart are too large or overworked. An EKG can point to conditions like blocked or narrow heart arteries, or previous heart attacks. EKGs are part of the normal evaluation in most visits to a cardiologist.

There are no special preparations for a standard electrocardiogram. An EKG can be done in a doctor's office. The technician will place a set of electrodes at locations on your chest, arms, and legs. Wearing fairly loose clothing will make it easier for everyone. If you have hair in the areas the electrodes will be placed, the technician may shave you a bit so that the electrodes can stick. Six leads are placed on the chest, and four on the limbs. A standard EKG only takes a few minutes. You will need to lie still during the test but you can breathe normally.

Why so many electrodes? Because then the electrical impulses can be measured from many angles through the heart. Consumer devices (like some watches or small portable monitors) are less precise than the machines in a medical office. More importantly, the machine in a doctor's office gives information about how the electrical impulses move through the heart from many angles.

There is no risk from an EKG. No electricity is being sent into the body. The electrodes just record the heart's electrical activity. It may be a bit uncomfortable when the electrodes are removed, especially if your skin is hairy. Some people may develop a small rash in those areas, which goes away within a few days.

Interpreting EKGs requires training! But with a bit of work, you can learn some basics. The figure shows the key features of a single heartbeat, recorded on lead I. From left to right, the P wave is the first wave,  and it originates from the two atria. The PR interval follows the P wave; it is a straight horizontal line because there is no electrical activity recorded then.  But something important is going on: the atrioventricular node (AV) node is slowing the electrical depolarization before it goes to the ventricles. The ventricles depolarize during the QRS complex. The Q wave is the first downward motion on the EKG; the R wave is the large upward motion that follows it. The S wave is the next downward motion. It crosses the isoelectric line (that straight horizontal line) and becomes negative briefly before bouncing back up and returning to the baseline. Lastly is the T wave which repres

The waves on EKGs are shown on graph paper (or a grid on a computer). The grid squares have a standard size: small squares are 40 mS (milliseconds, 1/1000 of a second) time horizontally and 0.1 mV (millivolt) amplitude vertically. Large squares are 5 x 5 small squares,  so a large square is 0.2 seconds by 0.5 mV. If the heartbeat is regular, the heart rate at that moment is 300 divided by the number of large squares between successive R waves. For typical adults at rest, there would be between 3 and 5 large squares (60-100 beats per minute or BPM). There are other standard intervals that are used in cardiology, including the PR interval (normally 3 to 5 small boxes), the QRS duration (normally up to 3 small boxes), the QT interval (normally 9-11 small boxes, but this varies with heart rate, sex and age).

The basics of EKGs are used in a number of other devices, including Holter monitors,  event monitors, and loop recorders.

Figure 1. The major waves in lead I from a normal EKG. 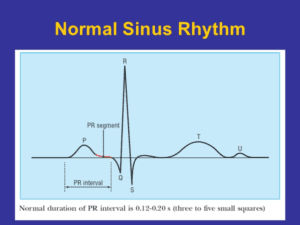 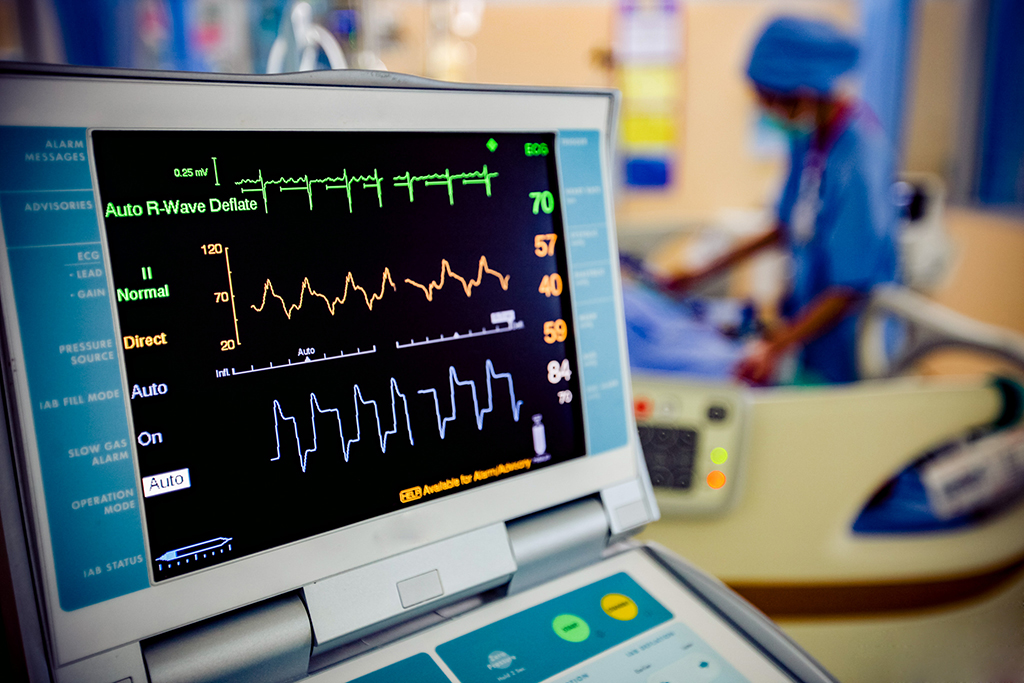